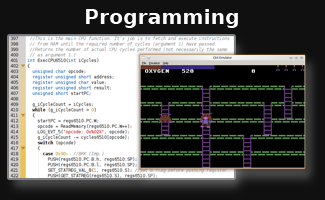 I have been programming now since about the age of 8. I started programming in BASIC on my Amstrad CPC464 by copying programs from the user manual and from Type-Ins from Amstrad Action magazine (and what a magazine that was…). Since then, I have moved from BASIC, to machine code and assembler (Z80, MOS 6510 and x86), C, C++, Java, Perl, Python, Pascal, PHP, Rust and more.

I have a real passion for programming, I really enjoy being able to make a computer do what I want it to do! Before I started programming professionally, I wrote hundreds of programs in various languages and on various platforms so that I could learn techniques and APIs. From games to basic operating systems, graphical techniques to physical simulations, it was all about learning and having fun!

During my professional career I have written many types of programs in many different languages for many different platforms. I have coded websites using ASP, ASP.net and PHP on both Unix and Windows servers. On the client side I have done considerable amounts of JavaScript coding, and more recently using WebAssembly to bring other languages to the web.

I have also written a whole host of back office utilities, many in C, C++, Pascal, Python and Perl to perform various tasks such as automation, glue systems, even complete back office systems.

My operating system of choice is Linux, so I also have a great deal of experience in general Unix command-line administration which also includes writing a lot of shell scripts to automate tasks. In my last place of employment I set up and maintained a headless Linux server which handled file sharing, printer sharing, web hosting, e-mail and databases. In fact this website, which I have created from scratch, is running on my own headless Linux box!

So basically this programming blog is really just an area where I can share my programming projects with others. For a start I have just posted a few quick messages about some of my projects with a few screenshots. In time I hope this blog will grow to include both new and old projects of mine and where possible I will also include source code. I’m a big advocate of open-source, and maybe some of my code might prove useful to others! So watch this space, there’s plenty more to come!